The History of Sparrowes Nest 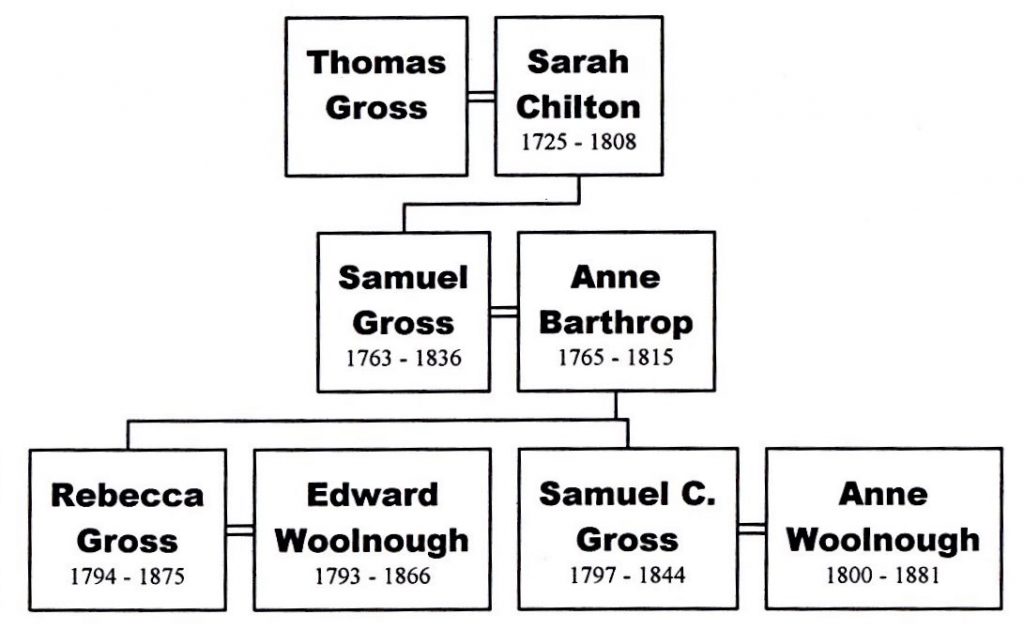 On the 29th ult. died in Seckford Street, Woodbridge, John Woolnough, Esq. late of Boyton, aged 76. A gentleman of honour & highest integrity and whose loss will be regretted by all who had the pleasure of knowing him.

And the Ipswich Journal of 22 March 1851 records the death of his mother:-

Educated at Boyton and at Dedham grammar school being admitted pensioner at Christ’s College, Cambridge on 9 November 1812, graduating B.A. in 1817 proceeding M.A. 1823. It is probable that he became acquainted with his future wife from the time that he was made curate in charge of Whitton church and he married at Alderton, Suffolk on 29 March 1819, Rebecca, the only daughter of Samuel Gross and his wife Sarah née Chilton and the young married couple lived with her widowed father at Sparrowe’s Nest with Edward continuing his ministrations at Whitton church.

Tuesday last was married at Alderton, by the Hon. & Rev. Adolphus Fitzroy, Edward Woolnough, Esq. of Christ’s College, Cambridge and of Whitton, in this county, to Rebecca, only daughter of Samuel Gross, Esq. of the former place.

Woolnough was ordained deacon by the Bishop of Norwich on 17 June 1821, as curate in sole charge of Whitton St. Mary church, and ordained priest on 18 June 1826, he was also curate at Akenham and Henley churches.

The incumbent at Whitton at that time was the eccentric Revd George Drury (1754-1830), sometimes conflated with his namesake grandfather, father and grandson who were all rectors of Claydon, Suffolk. George also held the livings of Akenham and Claydon and died at Glebe House, Claydon on 8 July 1830, his monumental inscription is in Claydon church. The next rector of Whitton, for whom Woolnough would have been curate, was Revd William Howorth (1806-1875) who only took up the living of Whitton in 1835 and where he remained until his death at Whitton Rectory on 13 December 1875.

The first baptism entry by Edward in the Whitton register is dated 1 February 1822. Edward remained curate at Whitton, living at Sparrowe’s Nest, until his move to Cheshire in 1849. By his wife Rebecca, who was born at Capel St. Andrew, Suffolk in 1794 and died at Altrincham, Cheshire on 11 March 1875, had eleven children born at Sparrowe’s Nest and baptised at Whitton church, four sons and seven daughters, having her last child at the age of 47, none of the sons had issue.

Medical Certificate. On Tuesday, 2nd inst. Mr. E. G. Woolnough, son of the Revd E. Woolnough, Thurleston Hall, near Ipswich, was admitted as a licentiate of the Worshipful Company of Apothecaries in London.

He then spent 18 months at Guy’s Hospital, London and the Ipswich Journal August 17 1844:-

He seems to have retired, probably due to ill health, and in 1851 was ‘not practicing’ boarding with Dr. James Young and his family at Burnt Street, Wells next sea, Norfolk where he died, unmarried, the following year. 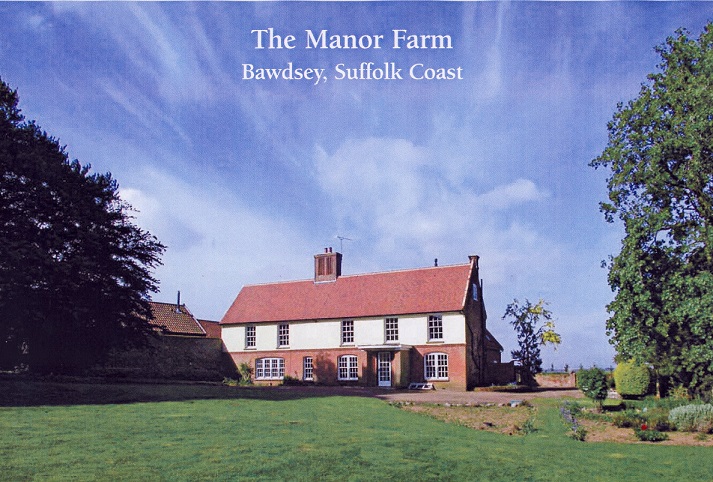 4 John Moor, baptised 13 November 1825, probably educated at Ipswich grammar school and entered the army retiring as a colonel. He lived for many years with his married sister Charlotte, at Ealing where he died, unmarried, in 1902.

7 Caroline, born 28 August 1830 and baptised 2 September the same year. She married at Altrincham, Cheshire in 1864, George William Mould, who was born at Sudbury, Derbyshire in 1835, for many years the superintendent medical practitioner at Manchester Royal Lunatic Asylum, and died in 1919. They had six children before Caroline’s death at Stockport, Cheshire in 1882.

8 Charles, baptised 19 February 1832. Educated at Ipswich school 1844-51, then in Foundation Street before its move to Henley Road, and admitted pensioner at Corpus Christi college, Cambridge on 11 March 1851, graduating B.A. (22nd wrangler) in 1855, proceeding M.A. 1859. He was living with his parents at Northenden in 1861 but took a position at St. Martin’s, Guernsey where he lived for most of his life. He died, unmarried, at Oxford on 16 September 1908. 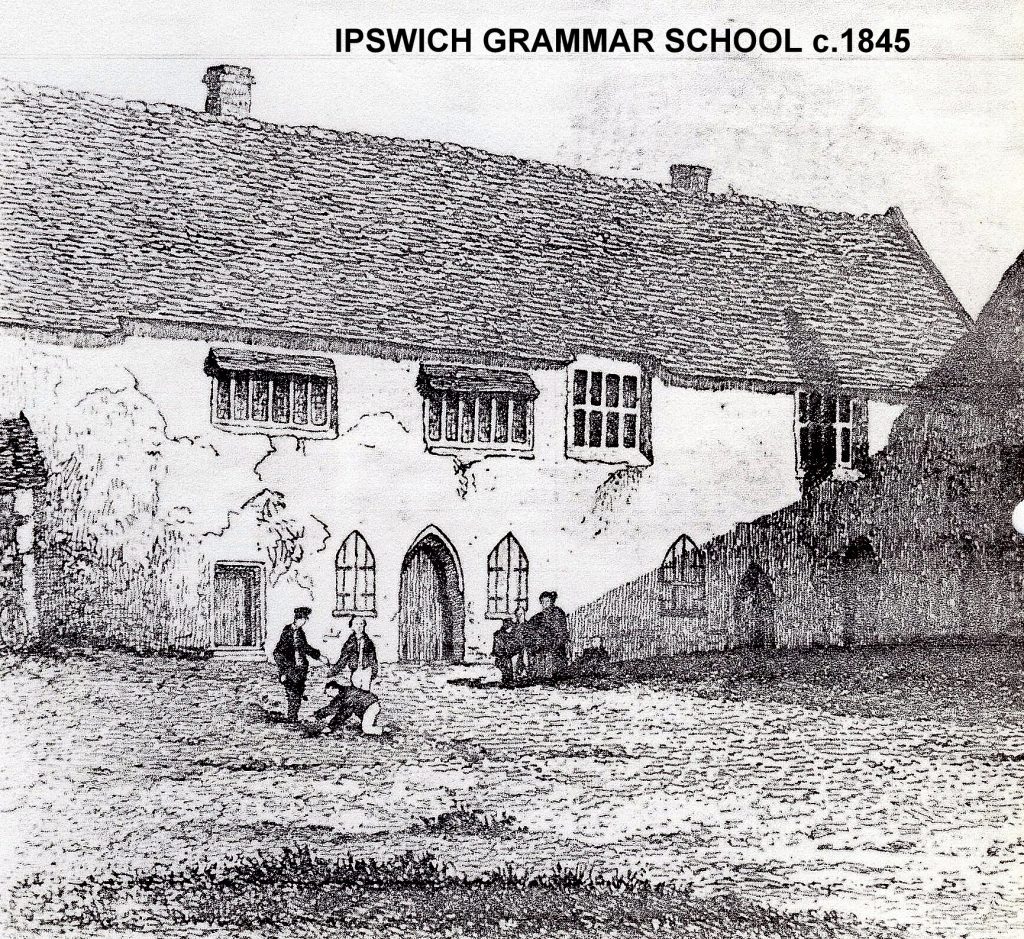 Notice in the Ipswich Journal of 7 September 1839.

‘Birth 6th inst. at Thurleston Hall, the lady of the Rev. Edward Woolnough of a daughter’ [Jessie]

John Moor Woolnough reported in the local press the sighting a meteor:- 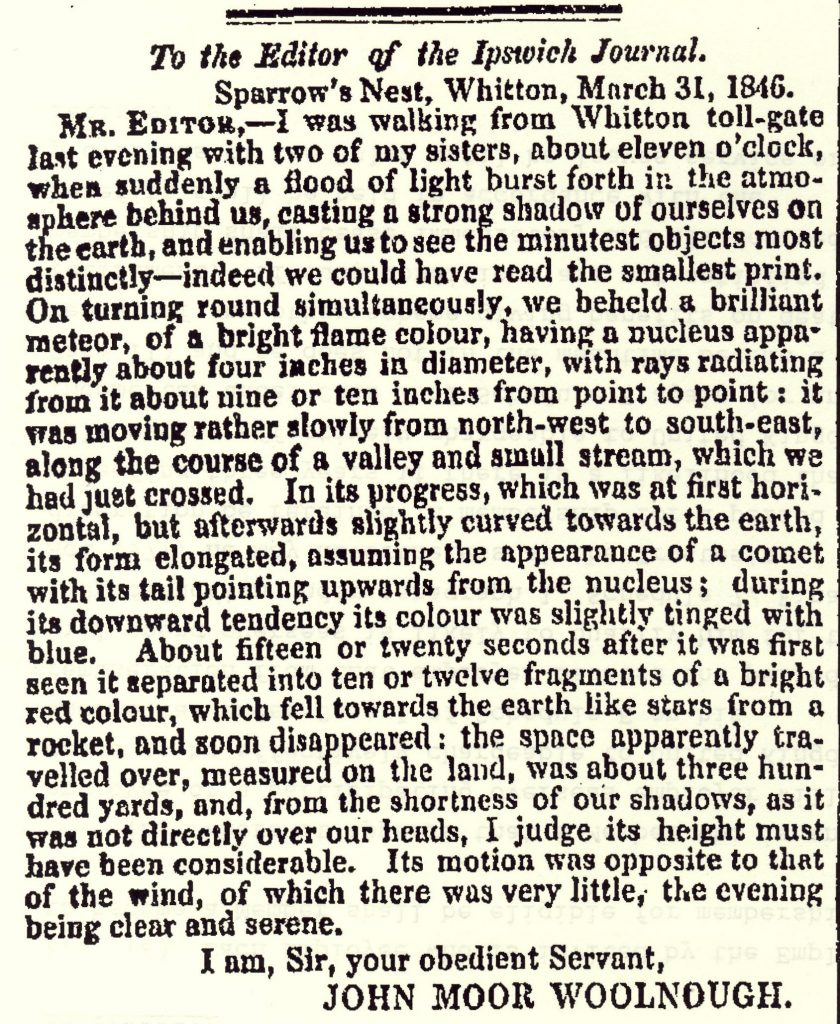 Woolnough seems to have been a generous local parson as this notice in the Ipswich Journal of 30 June 1838:- 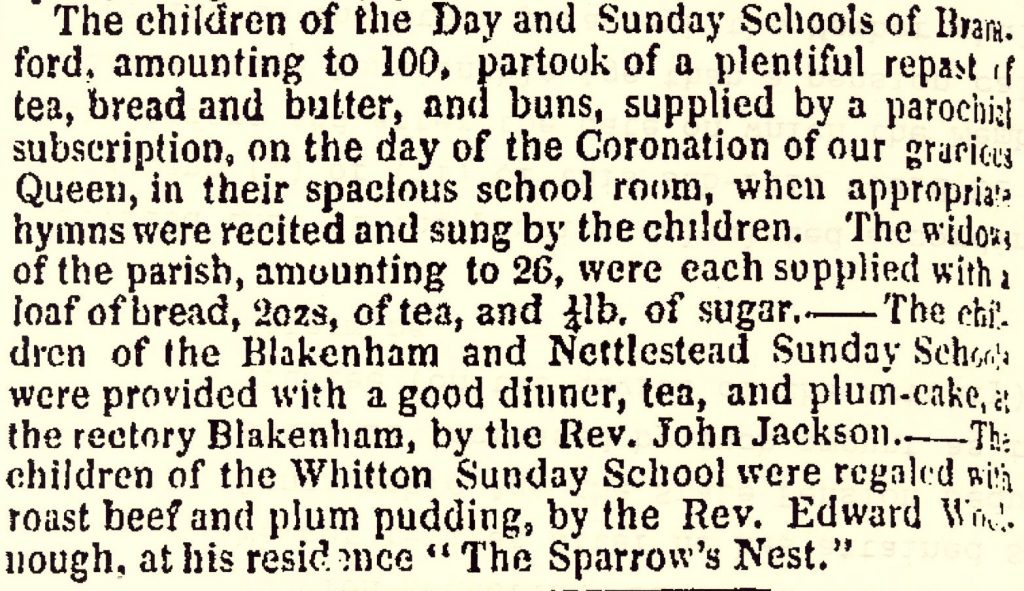 In 1836 tithes were still payable in most of the parishes in England and Wales, but the Government had decided on the commutation of tithes – in other words,  the substitution of money payments for payment ‘in kind’ all over the country –  and the Tithe Commutation Act was passed in 1836. Three Tithe Commissioners were appointed and the long process of commutation began, with Assistant Commissioners stationed around the country to oversee implementation of the Act. These money payments were not to be subject to local variation. The Act proposed a fluctuating money payment adjusted each year and based on the average price of wheat, barley, and oats.

A survey of the whole of England and Wales was therefore necessary. Enquiries were sent to every parish and township listed in the census returns, and meetings took place all over the country to find out how much commutation had already taken place. The Commissioners then established Tithe Districts to distinguish them from parishes. Most Tithe Districts corresponded with parishes, but the Commissioners could, if necessary, form separate districts. Many parish boundaries came under close scrutiny, perhaps for the first time in centuries, and maps showing these were drawn up. This huge effort to survey the country in the 1840s gives us the first detailed view of the rural landscape of England and Wales.

The only land disposal that had taken place between the time of Burton Phillipson and this survey was of ‘G’ Deal Close of 7-8 acres which is the field on the corner of Henley/Lower Road to the Turnpike Trustees who built the Toll House. (T66) the balance (T65) being sold onto William Bennett Martin of Dale Hall [q.v.] 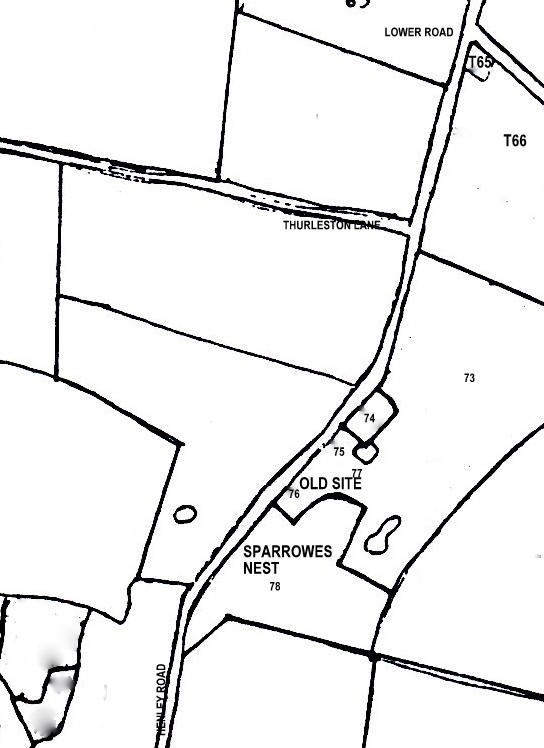 Enlargement of the Sparrowe’s Nest site

Woolnough also owned 11 acres of arable and pasture, cottage and garden in Whitton occupied by John Harvey and another.

Woolnough was on corresponding terms with Suffolk historian David Elisha Davy (1769-1851) and a letter from Woolnough to Davy (BL Add. Ms. 19240) reads:-

Some long time since when I had the pleasure of meeting you at Blaxhall you promised to favor me with your company for a few days at the Sparrow’s Nest. I now hope for the fulfilment of that promise on Wednesday the 5th of August.

I have written to our friend Ellis Wade and I hope that day will be convenient to you both. Sincerely wishing you nothing may prevent us the pleasure of your visit.

Davy recorded [Add.Ms. 19,093] ‘There is a drawing in the possession of the Rev. Edward Woolnough upon a map of the estate the Sparrows’ Nest in Whitton, which shews part of the old House, viz. One of the gabels [sic] – of which there were originally five – and he has a medal, which shews the House when nearly perfect. The old House was pulled down by the Rev. E. Woolnough, the present possessor, who has built a new one a little higher up, but still near to the old site; the old Barns remain. The original house is said to have been built [by] or to have belonged to Cardinal Wolsey.’ The East Anglian Daily Times of 4 July 1948 quotes ‘Robert Sparrowe, portman of Ipswich built himself a house in the parish of Whitton some time in the reign of Charles 1. Only the barn remains of the original buildings the mansion having been pulled down by the Rev. E. Woolnough who built the present house on the site. Both these records are partially incorrect.

Woolnough moved to Cheshire in early 1849, where he was instituted rector of Northenden, a post that he retained until his death on 29 August 1866. Hon. Canon of Chester cathedral in 1860 and archdeacon of Chester 1865-66.

On the 20th inst. the Revd Edward Woolnough, M.A., was instituted to the rectory of Northenden, in the diocese of the county of Chester.

The Essex Standard of 20 July 1849 has an advertisement for the sale of Sparrowe’s Nest:-

By an indenture of 29 October 1849 Woolnough sells all the land on the west side of Henley Road, opposite to Sparrowe’s Nest to Charles Steward on which Stewart built a house, Thurleston Lodge [q.v.], Sparrowe’s Nest and the surrounding 168 acres of farmland on the east side of Henley Road, and tithes of some 400 acres were sold to Revd William Charles Fonnereau (1806-1855) of Christchurch Park.

Proved at Chester the 21st day of October 1866 by the oaths of Rebecca Woolnough, widow the relict, John Moor Woolnough, Esquire and Charles Woolnough, the sons, the executors to whom administration now granted.

The estate of the Venerable Edward Woolnough was late of Northenden in the county of Chester, clerk, archdeacon of Chester and died on the 29th day of August 1866 at Northenden aforesaid

I, Rebecca Woolnough, widow give and bequeath to my son Charles Woolnough, the two cabinets of coins, Rudings ‘Outline of the Coinage of Great Britain’, ‘History of Cambridge’ and the silver snuff box. To my daughter Mary Gross, all my wearing apparel and the contents of my drawers, work-table & boxes and the six pieces of china which were he grandmother Woolnough’s. To my daughter Caroline Mould, the glass and gold vase and her choice of one bowl and dish. To my daughter Agnes Peel one bowl and dish and the pearl book knife. To my daughter Jesse Clarke the small bowl and the similar mug. To my daughter Charlotte Matthey the two grey vases and the assorted china vases. To my son John Moor Woolnough I leave the parish gift and the candlesticks, the corner shelves and the china on them, the gold snuff box, the silver candlestick, the china of Christ’s College and the ostrich egg. The other amounts in the drawing room and on my mantel piece I wish my daughters to divide amongst themselves. The trinkets in my jewel box, the pictures and books and give to them where names are attended. Everything else I leave to my son John Moor Woolnough. I desire my funeral expenses to be paid out of the money I have at my disposal and the remainder to my son John Moor Woolnough

At Chester on the 2nd day of April 1875. Administration with the will annexed, with the personal estate and effects of Rebecca Woolnough, late of Clarendon Avenue, Altrincham in the county of Chester, widow, deceased, who died on the 11th day of March 1875 at Clarendon Avenue, aforesaid, was granted to John Moor Woolnough, Esquire, the son of the aforesaid deceased, the residuary legatee named in the said will having been first devisee there being no executor named in the said will.